You’re making breakfast for the family and you want to treat them to some fresh hash brown potatoes. They’re all done cooking and you go to serve it up, and it flops on the plate a gooey, sad gray mess. What went wrong?

To be totally honest, I was not aware that potatoes needed to be prepared a certain way in order for them not to turn gray and gummy. I just figured either I was using the wrong type of potatoes, or you just had to cook them immediately in order for them not to turn gray. When I tried to give hash browns a shot there was nothing I thought I could do to make them look or taste right. I just figured there was some sort of secret restaurants were keeping from me, preventing me from having hash browns at home. 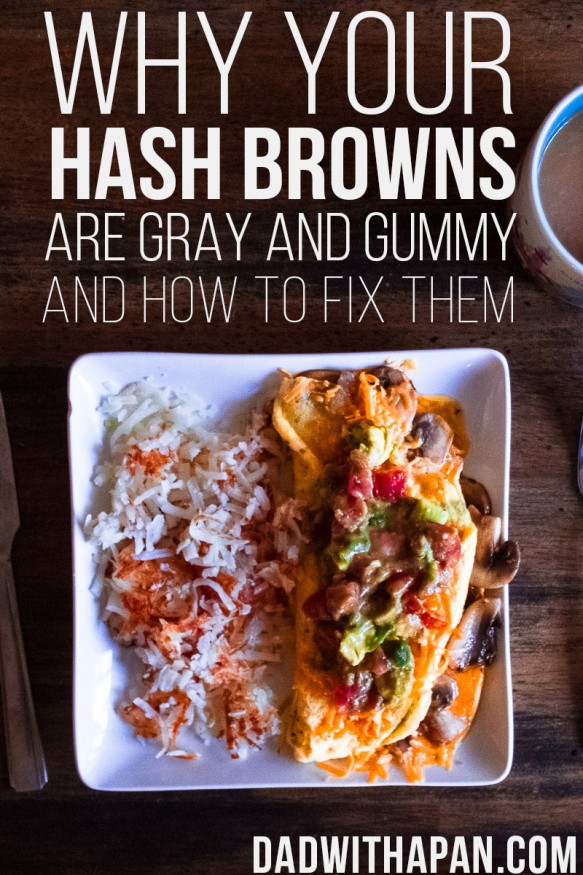 I eventually just gave up making them because it was too much of a pain and they just looked like crap. It wasn’t until a few years ago that I finally did some research to figure out why in the world I couldn’t cook hash browns correctly for breakfast. Why do they turn gray. Why are they a gummy mess? What the heck come after 6?

Potatoes as I’m sure you’re aware of have a lot of starch. When potatoes are cut, especially into smaller flakes like your would for hash browns a lot of the starch begins to oxides and will cause the potatoes to turn gray. That starch is turning into sugar, mixing with the moisture in the potatoes which also causes it to become gummy.

So you know why it’s getting gray and gummy. So how do you prevent it from happening? Here’s a couple solutions that I use to prepare my hash browns and potatoes for other dishes as well! 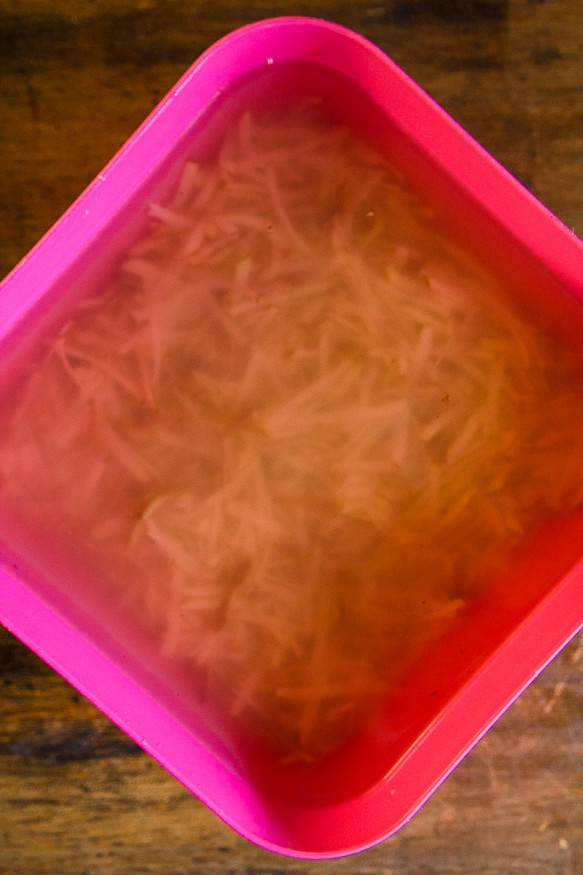 This should actually be a rule of thumb whenever you prepare freshly cut potatoes, whether it’s hash browns, country potatoes, or french fries.

When you grate whole potatoes for hash browns, do it directly over a bowl with cold water. Let the potatoes sit in the water for at least 15 minutes, for best results overnight. The water will remove all the excess starch from the potatoes and will solve any graying issues and will give you crispier potatoes as well! 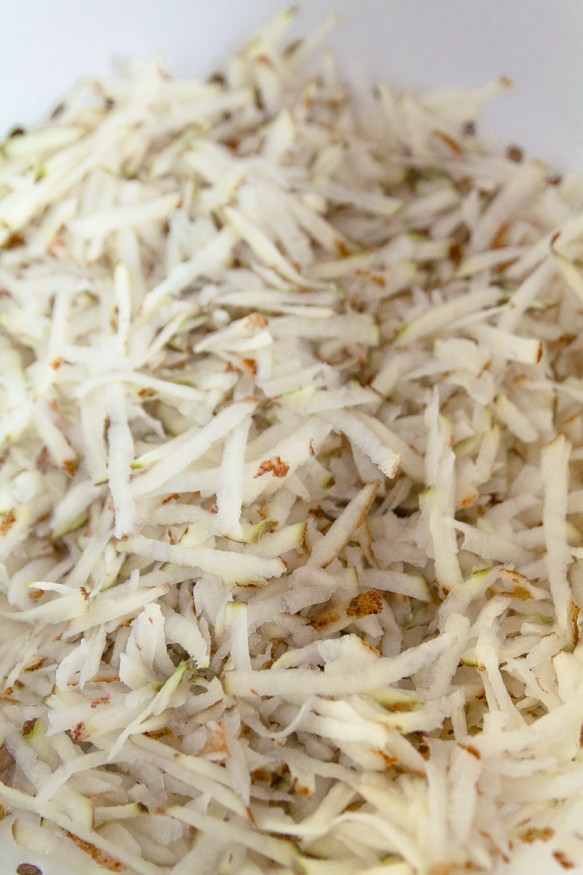 Once your potatoes are done soaking pour them through a strainer. Quickly rinse to get any residual starch off, then pat the potatoes down with a towel. You’ll want to remove as much moisture as possible because this will prevent your hash browns from getting as crisp as possible. All the water will just create steam and as any additional starch is released from the potato it’s going to get gummy, just not as gummy as before. So get them dry! 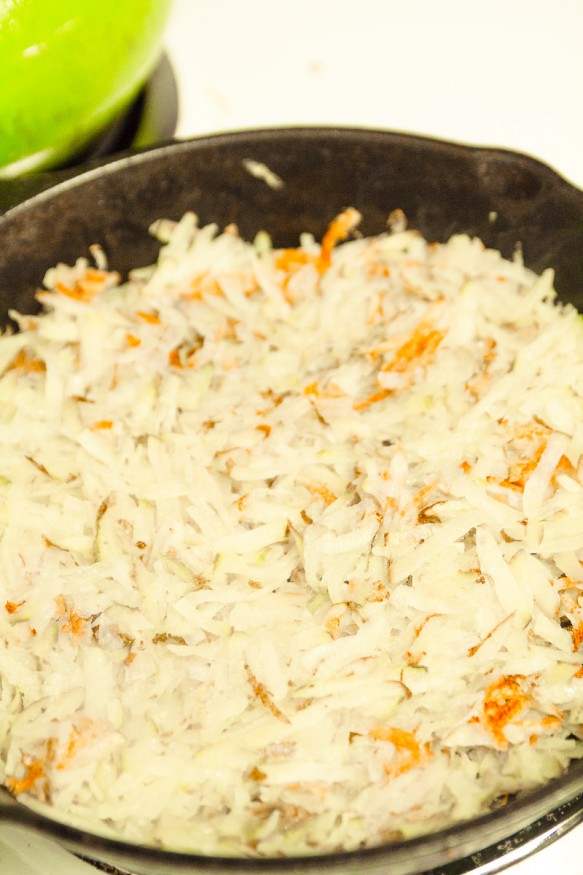 When cooking your hash browns, make sure not to throw too much into your pan. Just like anything you cook in a pan, if you overcrowd the pan it will cause food to steam and you’ll get a soggier hash brown for it. If you need to cook a lot of hash browns I highly recommend a electric griddle so you can keep the layer of potatoes thin and not have to cook them in multiple batches

Is There A Quicker Way?

So this will give you hash browns that come out a lot better than you had before, but this takes me a good 20-30 minutes to do, plus a lot of frustration because there’s a good chance you’ll nick your fingers on the grater. Plus, you’re really going to want to soak overnight, I’ve found that is the best way to get your hash browns to come out right when using the soak method.

So how can you get this done quicker?

This method is awesome! Not only does it take have the time in the morning to prep, your cooking time is reduced exponentially! Instead of a 30 minute prep/cook in to make hash browns, it takes me 5 minutes. 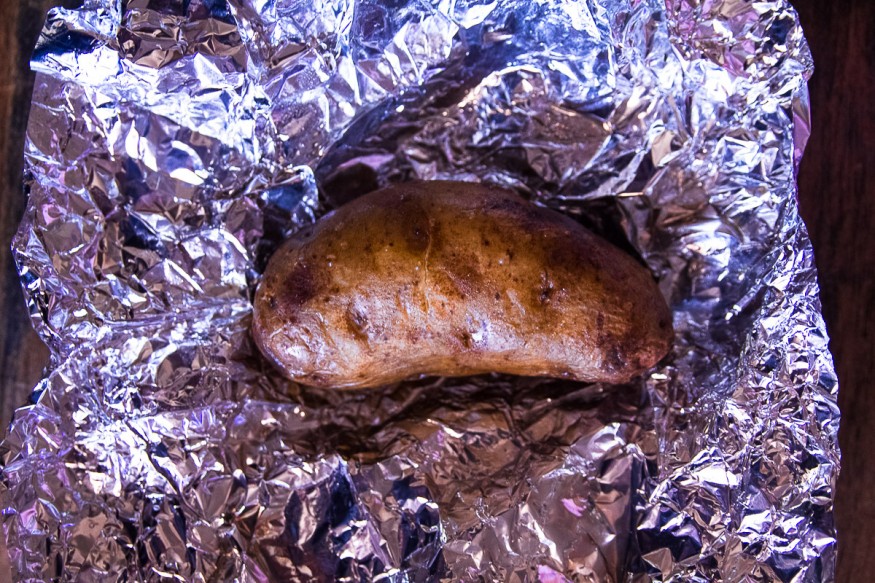 So If you’re planning on serving up some baked potatoes for dinner, throw a couple extra more in the oven. No extra work you’re just making a couple extra for later right? All you have to do is store them in the fridge for when you’re ready to have some hash browns for breakfast! They should keep in the fridge for 3-5 days before becoming questionable.

So no that all the prep has been done, all you need to do with grate the cooked potato into a bowl. Did you notice how much easier it grates? It normally takes me about 45-60 seconds per potato when grating raw and there’s a good chance my hand will slip and get caught in the grater.. Grating a cooked potato took me no longer than 10 seconds and it runs through the grater with no resistance so the odds of your cutting your hand isn’t that high. Win/Win right? 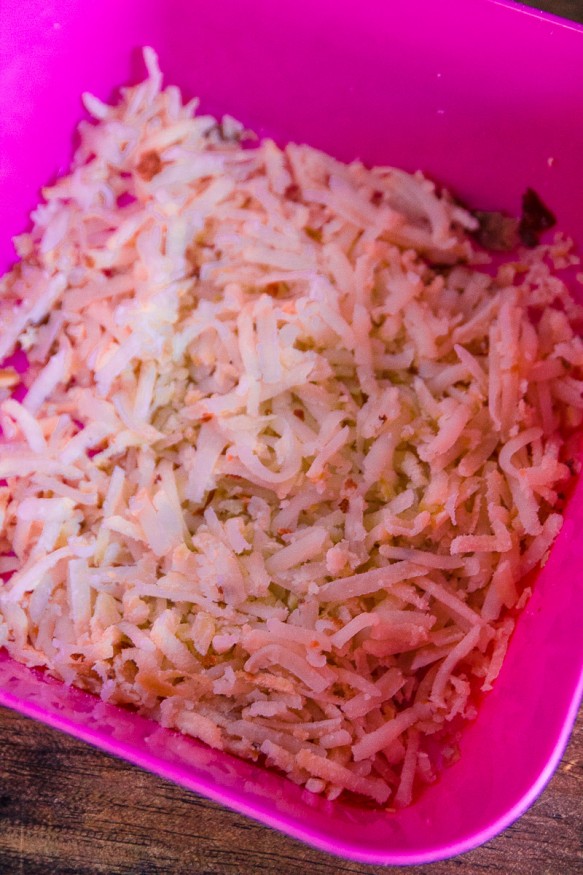 Again like the first method, you still want to keep the layer of potatoes thin, but you don’t need to cook as long . They will brown and crisp up so quick and easily! Just throw them in a pre-heated pan with about 2 tbsp of oil and season with some salt.

Ah crap. I forgot to soak. Oh wait. There is no soaking step! When frying up hash browns using pre-cooked potatoes the starch is not an issue any longer. 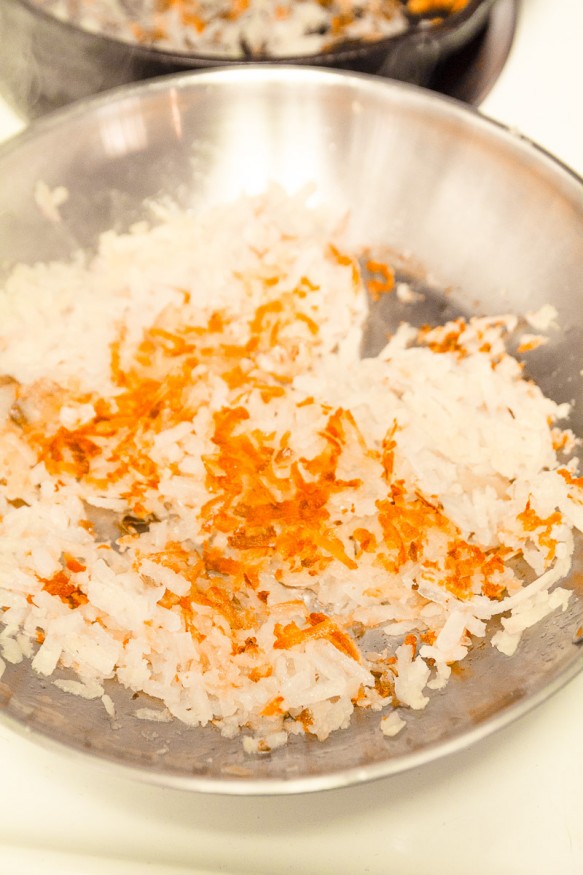 It takes about 2 minutes on each side and you’re hash browns have a beautiful golden brown crisp, aren’t gray or gummy and are delicious!

So next time your craving hash browns don’t be intimidated, they’re simple to make as long as you have them prepared correctly! Get out your pan and get them cooking for the family and have a great start to your day! Please feel free to share any tips you have on keeping your hash browns from turning gray in the comments! 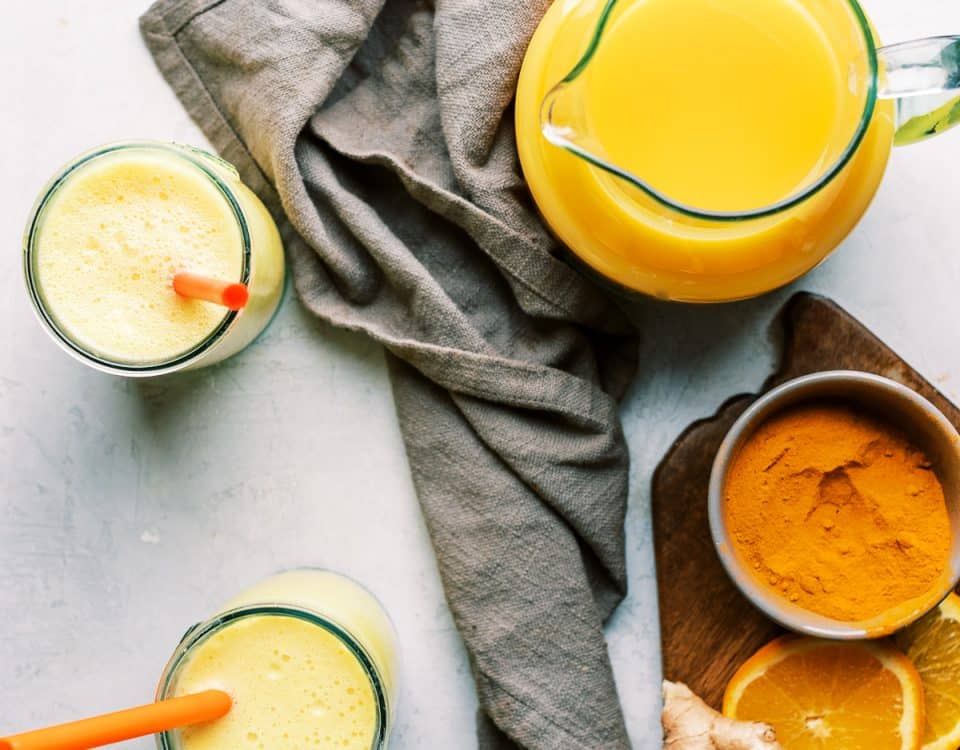 This orange juice ginger and turmeric smoothie is the perfect breakfast or afternoon snack to get a great source of immune supporting nutrients into your system. […]
Do you like it?
0 Read more 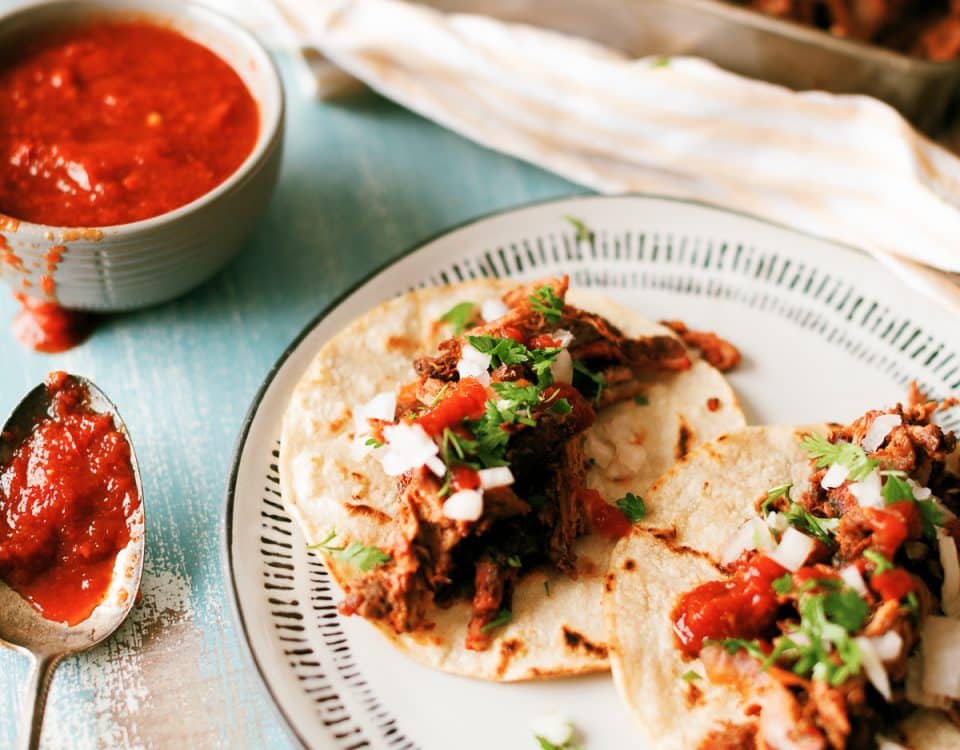 Smoked barbacoa tacos is a great way to change up taco night. I wanted to get a really good flavor. So instead of using my Traeger […]
Do you like it?
0 Read more 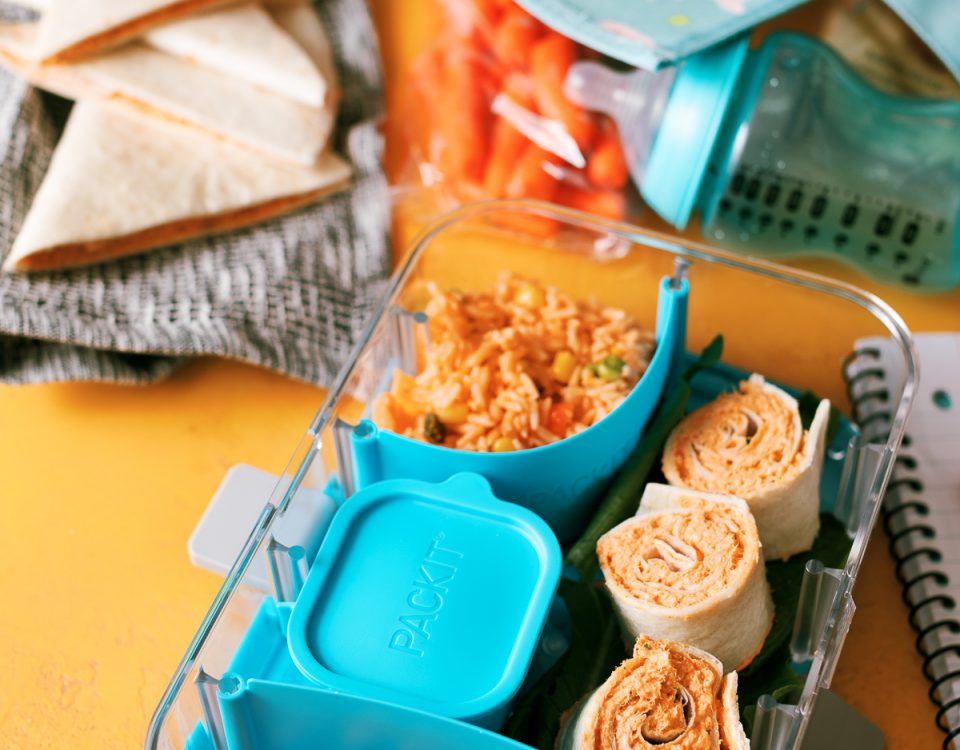 Figuring out an easy back to school lunch for kids in different phases is a little tricky. I think I’ve nailed it with these chicken enchilada […]
Do you like it?
0 Read more 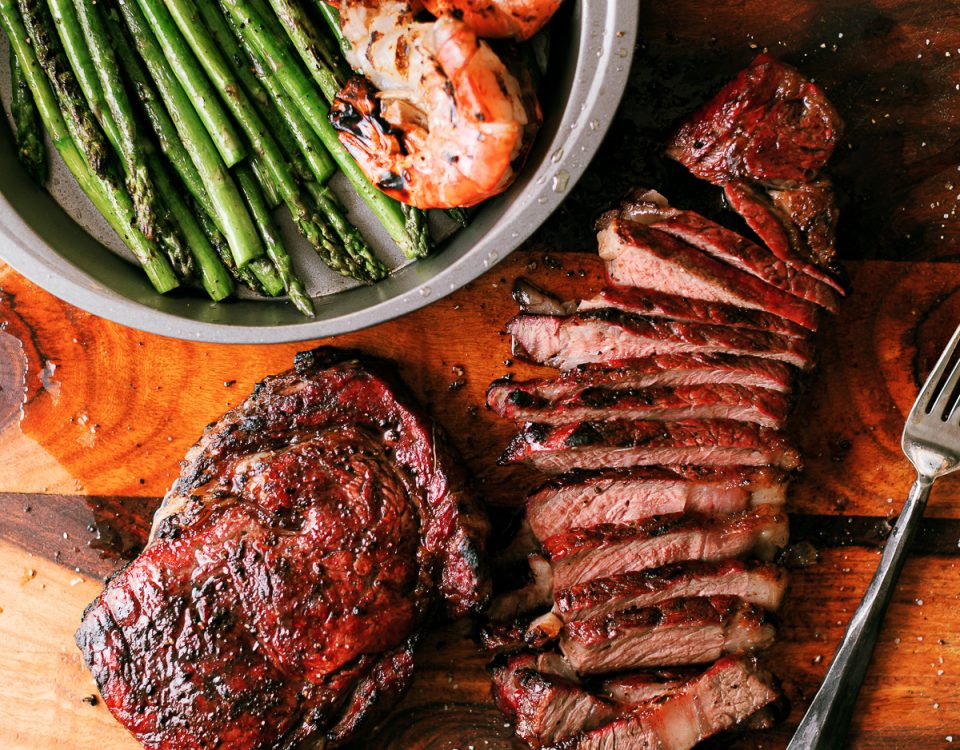 Smoked rib eyes are pretty much the only way I do rib eyes these days. But how you sear them makes a whole world of difference. […]
Do you like it?
0 Read more 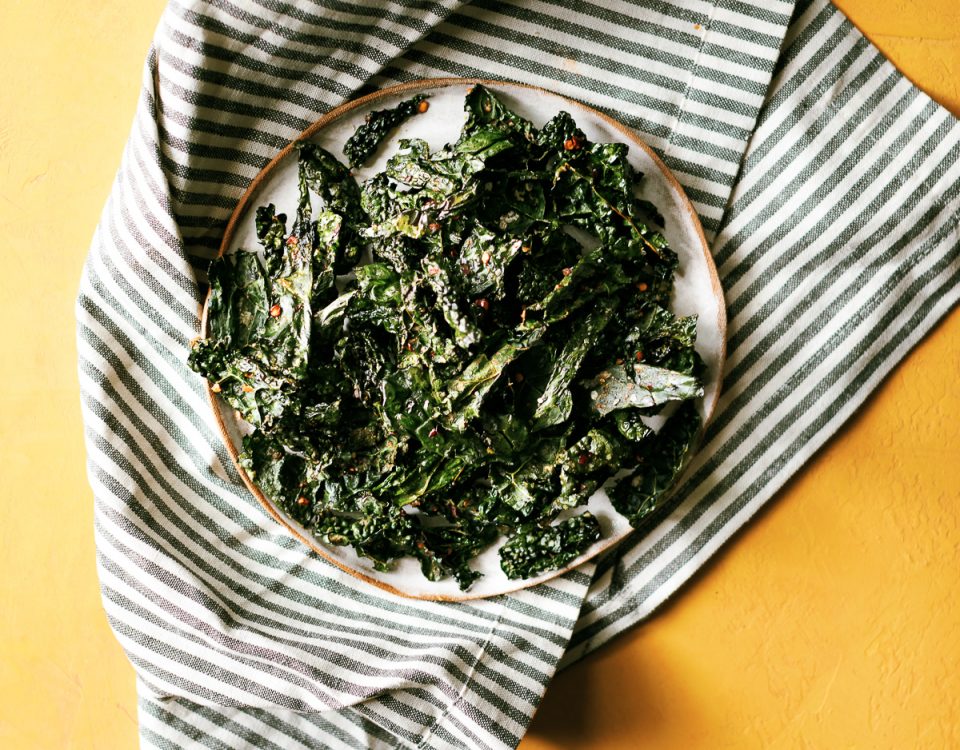 How To Make Kale Chips

This is a recipe I never that I’d be sharing – Kale Chips. Nothing intrigues me about kale. Absolutely nothing. Kale is something that I never […]
Do you like it?
0 Read more 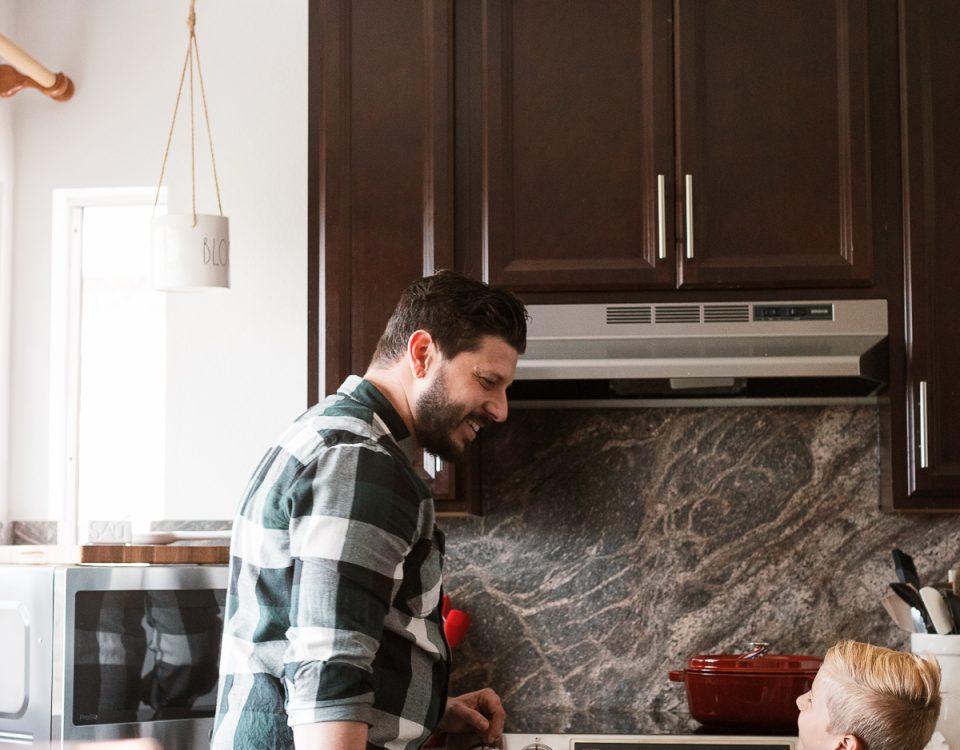 Upgrading My Kitchen Look With This Weekend Project

Weekend projects are what I live for. Since moving into our new home, I’ve dubbed Sundays “Project Day” And with craziness of the holidays is behind […]
Do you like it?
0 Read more 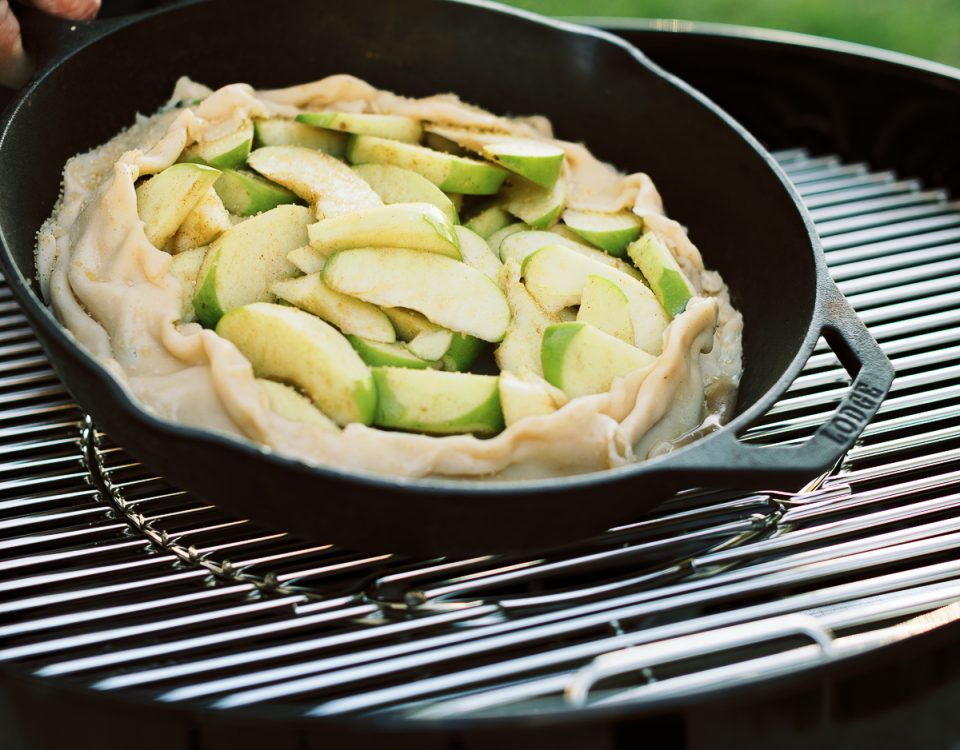 I love making apple galettes but can’t give up that wonderful smoky flavor of the summer. This grilled apple galette is a wonderful blend of fall […]
Do you like it?
0 Read more 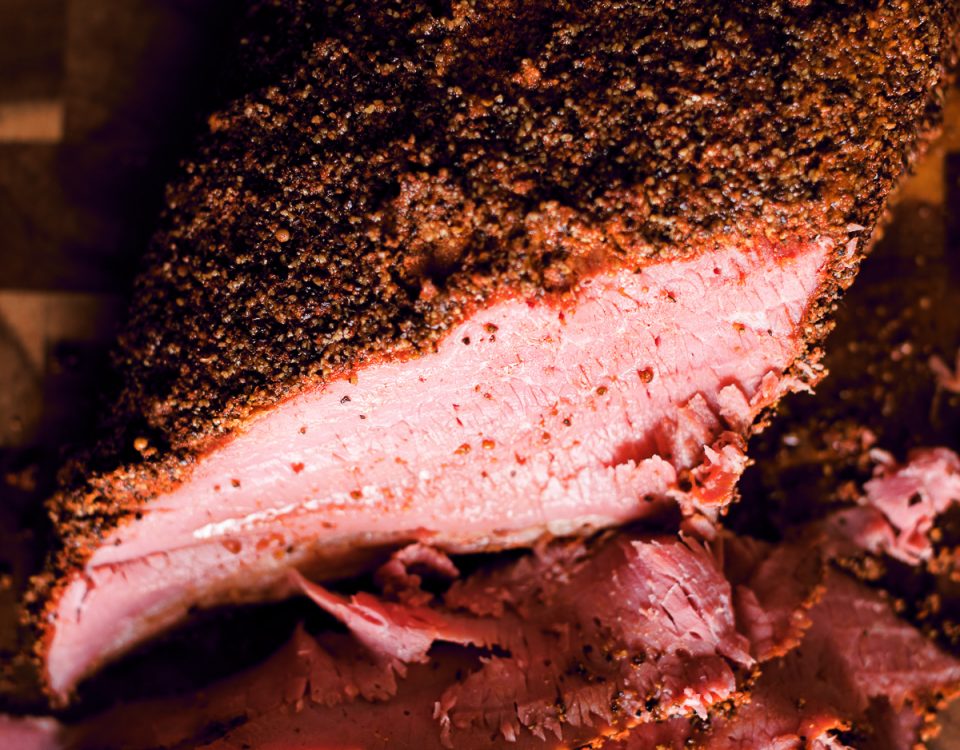 If I had a dime for every time I tossed a carton of unused strawberries, well… I’d have like 50 cents. Because that was the old […]
Do you like it?
0 Read more 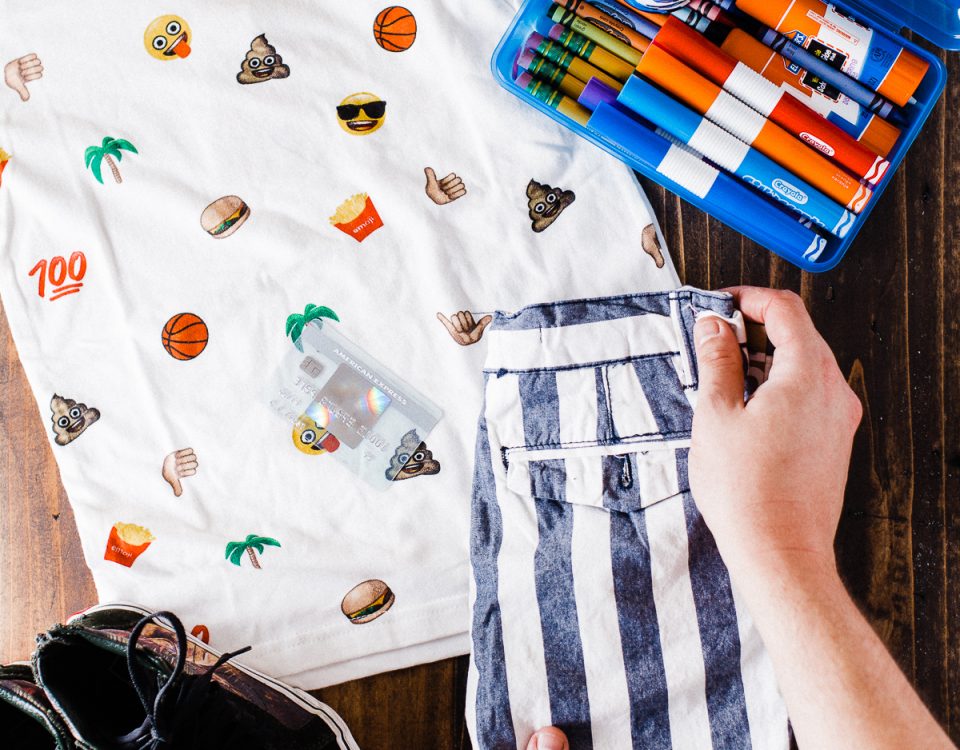 Getting The Most Out Of My Amex EveryDay Credit Card

I’m not one to go ham with credit cards, I’m not huge on creating unwanted debt. But I do like getting rewarded for my everyday expenses! […]
Do you like it?
0 Read more
12345
Next page 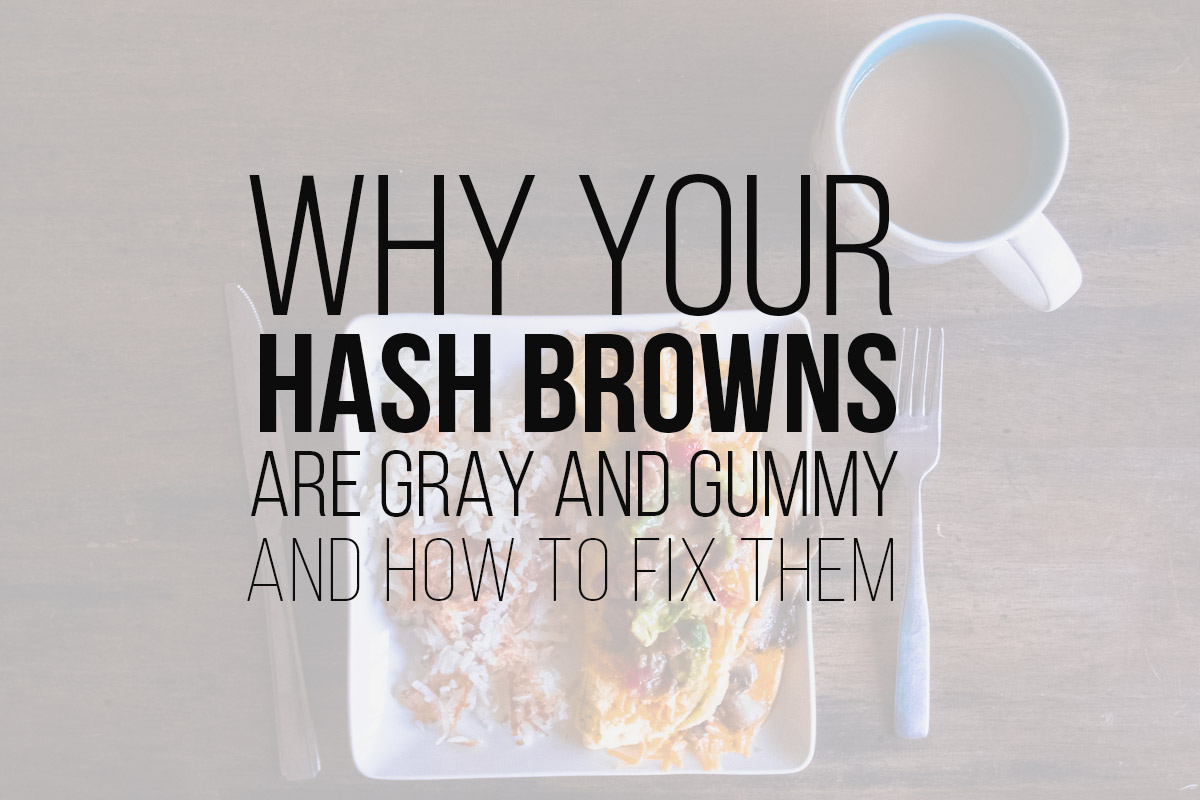 You’re making breakfast for the family and you want to treat them to some fresh hash brown potatoes. They’re all done cooking and you go to serve […]
Do you like it?
10 Read more 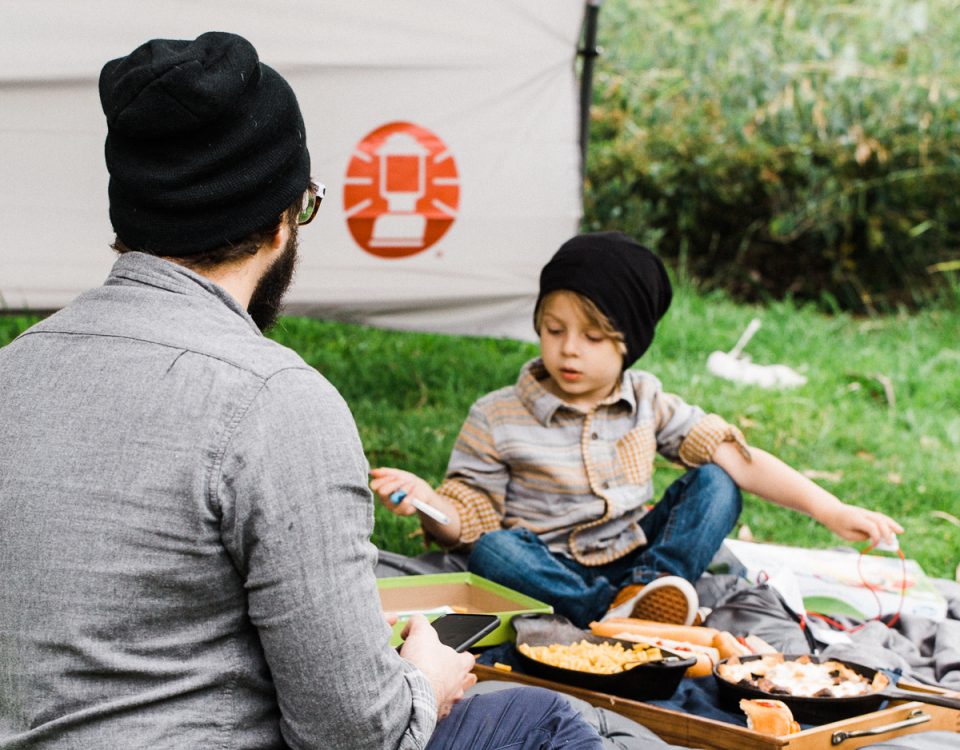 Why You Should Have A Daddy and Me Backyard Movie Night

This post has been sponsored by Coleman. All thoughts and opinions are my own! My Son Brayden is almost 4 and about to become a big […]
Do you like it?
43 Read more 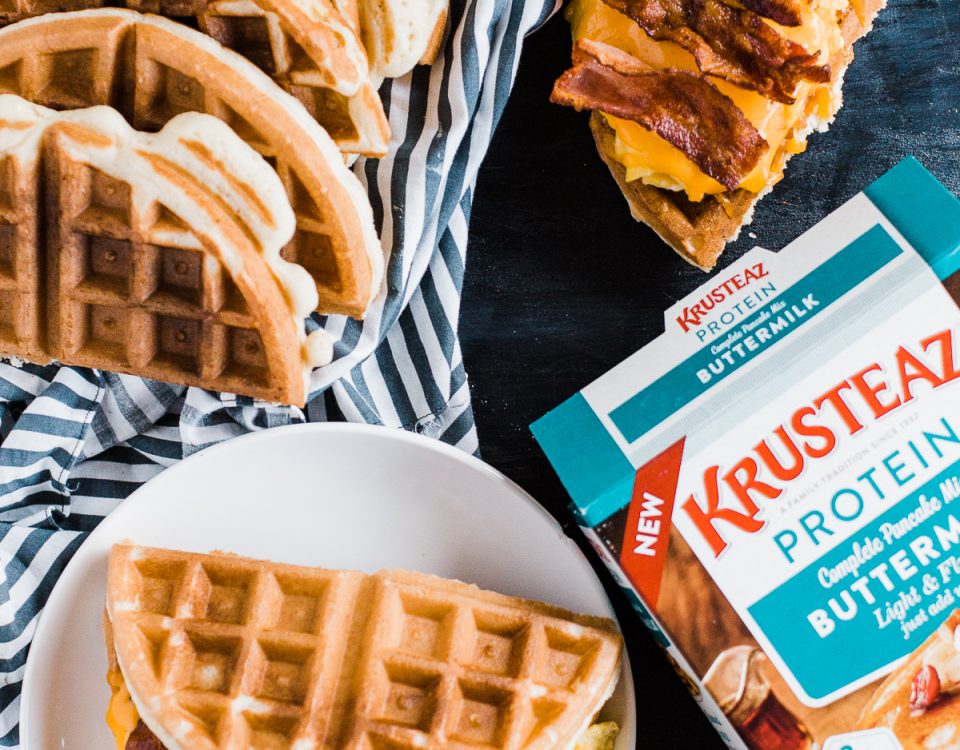 This post has been sponsored by Krusteaz. All Opinions are my own. I can grub on a breakfast sandwich any day of the week. Today I’m […]
Do you like it?
0 Read more 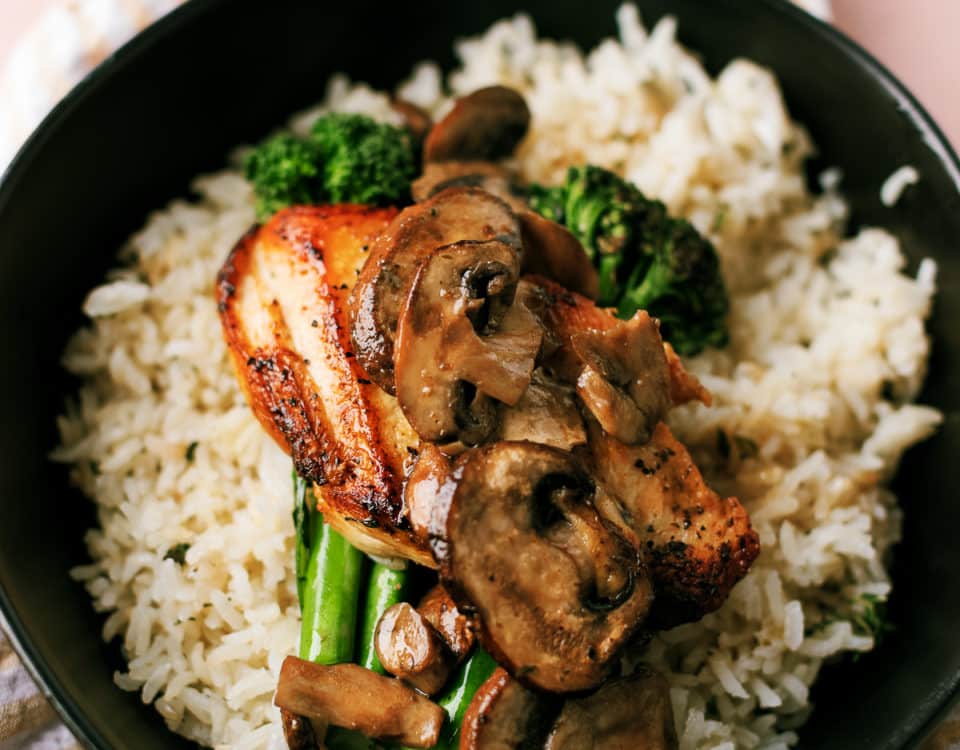 This is my kids favorite chicken and rice recipe! I start with a scratch thyme seasoned rice that is light fluffy, and well seasoned. Then top […]
Do you like it?
0 Read more